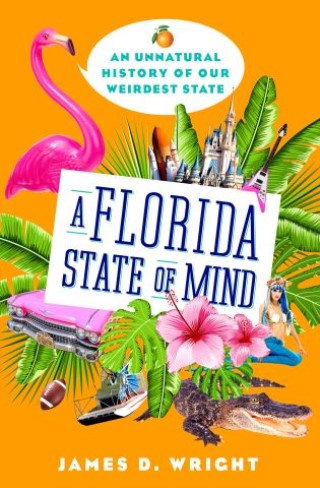 A Florida State of Mind

An Unnatural History of Our Weirdest State

A witty history of the state that's always in the news, for everything from alligator attacks to zany crimes.

There's an old clip of Bugs Bunny sawing the entire state of Florida off the continent—and every single time a news story springs up about some shenanigans in Florida, someone on the internet posts it in response. Why are we so ready to wave goodbye to the Sunshine State? In A Florida State of Mind: An Unnatural History of Our Weirdest State, James D. Wright makes the case that there are plenty of reasons to be scandalized by the land and its sometimes-kooky, sometimes-terrifying denizens, but there's also plenty of room for hilarity.

Even the most natural parts of Florida are unnatural. Florida citrus? Not from here, but from China. Gators? Oh, they're from Florida all right, but that doesn't make having 1 per every 20 humans normal. Animals...in the form of roadkill? Only Florida allows you to keep anything you kill on the road (and anything you find).

Yet everyone loves Florida: tourists come in droves, and people relocate to Florida constantly (only 36% of residents were born there). Crammed with unforgettable stories and facts, Florida will show readers exactly why.

James D. Wright: JAMES D. WRIGHT is a sociologist at the University of Central Florida and a Florida resident for nearly two decades. He lives in St. Pete Beach with his wife and an assortment of cats and dogs. A Florida State of Mind is his first book.