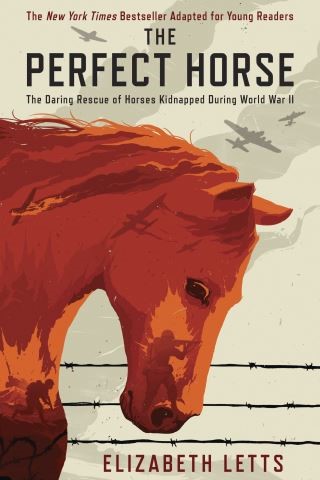 The Daring Rescue of Horses Kidnapped During World War II

In this inspiring young readers adaptation of the New York Times bestseller, one American troop will save the world's most precious horses during the final stretch of World War II.

When American Colonel Hank Reed and his soldiers captures a German spy, they uncover an unexpected secret: Hitler has kidnapped the world's finest purebred horses and hidden them in a secret Czechoslovakian breeding farm. But, starving Russian troops are drawing closer and the horses face the danger of becoming food instead. With little time to spare, the small American troop cross enemy lines to heroically save some of the world's most treasured animals.

Elizabeth Letts details the terrifying truth of Hitler's eugenics program during World War II and shares the story of the courageous American troop dedicated to stopping it.

Highlighting bravery in the face of incredible odds, this tale will shed light on a little-known piece of our past and speak to history fans and animal lovers of every age.

Elizabeth Letts: Elizabeth Letts is the #1 New York Times bestselling author of non fiction books The Eighty-Dollar Champion and The Perfect Horse as well as two novels, Quality of Care and Family Planning. A competitive equestrian in her youth, Letts rode for California in the North American Junior Three-Day Eventing Championships. She currently lives in Southern California. To learn more about Letts and her books, go to elizabethletts.com and follow @ElizabethLetts on Twitter, Instagram, and Facebook.