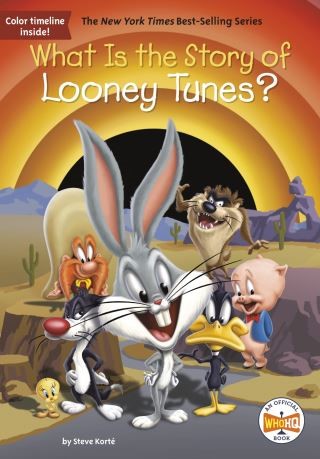 What Is the Story of Looney Tunes?

Who HQ brings you the stories behind the most beloved characters of our time.

If you're a fan of Acme anvils and know that the question "What's up, Doc?" needs no answer, this history of the cartoon favorites Looney Tunes is for you!

In the 1930s, Warner Brothers studios introduced the world to the Looney Tunes. A witty rabbit named Bugs, a stuttering pig named Porky, and an erratic duck named Daffy are just some of the characters that have left audiences hysterically laughing for almost a century. These animated short films, starring some of the most iconic cartoon characters in history, went on to have a second, long life on television.

In this book, author Steve Korte details how these toons were imagined, which talented folks were tasked with animating and voicing them, the success the shows and films have garnered over the years, and what lies ahead for Bugs and the gang.

Steve Korte: Steve Korté is a former editor for DC Comics. He is now a freelance writer and has written books for DC Comics and Warner Bros. He lives in New York City.