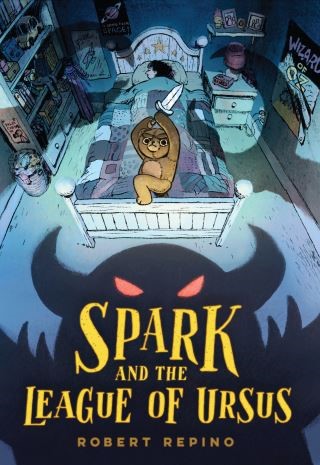 Spark and the League of Ursus

Toy Story meets Stranger Things in this epic tale of warrior teddy bears and the children they protect.

Spark is not your average teddy bear. She’s soft and cuddly, sure, but she’s also a fierce warrior. At night she fulfills her sacred duty: to protect the household from monsters. But Spark’s owner Loretta is growing up and thinks she doesn’t need her old teddy anymore.

When a monster unlike any other descends on the quiet home, everything changes. Children are going missing, and the monster wants Loretta next. Only Spark can stop it. She must call upon the ancient League of Ursus—a secret alliance of teddy bears who are pledged to protect their human friends. Together with an Amazon-princess doll and a timid sock monkey, the bears are all that stands between our world and the one that lies beneath. It will be a heroic chapter in the history of the League . . . if the bears live to tell the tale.

Robert Repino: Robert Repino is the author of Mort(e), Culdesac, and D’Arc, which make up the critically acclaimed War with No Name series (Soho Press). He holds an MFA in creative writing from Emerson College and teaches at the Gotham Writers’ Workshop. He lives in New York City where he works as an editor at an academic publisher. This is his middle-grade debut. Robert had two special teddy bears when he was growing up: Bear and Blue Bear.