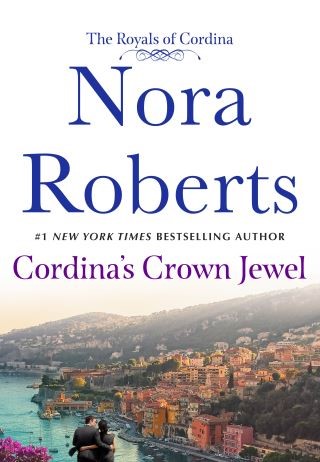 The Royals of Cordina

“The most successful novelist on Planet Earth” (Washington Post), #1 New York Times bestselling author Nora Roberts concludes her Cordina’s Royal Family quartet with the story of a noble and commoner discovering that despite their societal roles, their love has no forbidden boundaries in Cordina’s Crown Jewel.

Princess Camilla de Cordina’s life is governed by others. Her appearance is sculpted and behavior is modified so she can be paraded before a gaping media audience only interested in gossip and scandal. Taking a well-deserved “vacation”, she trades her crown for a felt hat and her de Cordina title for the name Camilla MacGee. With no regal entourage in tow, she takes a job in America working for archeologist Delaney Caine in Vermont.

Focused and driven with his own goals, Del doesn’t treat his staff with pleasantries, much less offer deference to a currently uncrowned princess. Nonetheless, Camilla finds her newfound persona and detailed work rewarding. And when she uncovers a loving heart beneath Del’s hardened exterior, an unexpected mutual desire arises between them—a desire that could very well be extinguished should Camilla reveal her true identity.

Nora Roberts: NORA ROBERTS is the #1 New York Times bestselling author of more than 200 novels, including Hideaway, Under Currents, Shelter in Place, Year One, Of Blood and Bone, The Rise of Magicks and many more. She is also the author of the bestselling In Death series written under the pen name J.D. Robb. There are more than 500 million copies of her books in print.